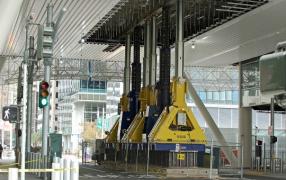 Mayor London Breed and Oakland Mayor Libby Schaaf on Thursday jointly called on the Metropolitan Transportation Commission Thursday to “assist in evaluating” the cause of those two cracked beams.

The Transbay Joint Powers Authority, known as the TJPA, is conducting its own analysis, the mayors noted in their joint letter, but the pair said “we believe the only way to ensure” public confidence “is by engaging an outside firm to review and verify any findings,” and for that peer review to be managed by the MTC.