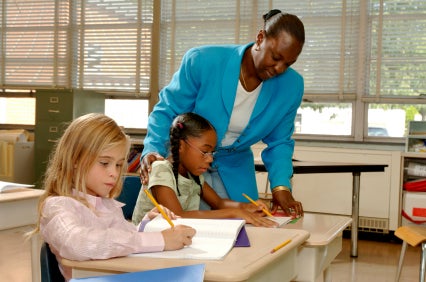 Twice as many families used licensed childcare as informal options

For the nearly half of families surveyed with at least one child age zero to five, a majority (64%) had a child enrolled in a licensed childcare or preschool program, while approximately one in three (29%) used more informal childcare systems, such as a family friend, neighbor, nanny, or family member other than a parent or guardian on at least a weekly basis.[1] While trends across age groups were similar, respondents with younger children were slightly more likely to use informal childcare than respondents with children ages three to five. The citywide rate is also consistent across income levels, though lower income respondents were slightly less likely to use informal childcare than those with higher incomes. 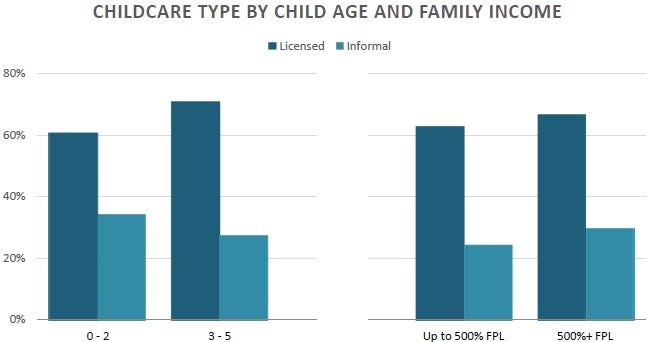 Of those respondents with a child enrolled in childcare or preschool, 96% said they were satisfied with the program. This survey found that neither the rates of childcare utilization nor satisfaction with childcare options varied significantly between demographic groups.

Cost, available space, and waitlists were the biggest challenges when securing childcare

Most respondents with children age zero to five (73%) agreed that childcare and preschool programs were accessible to them. However, they also shared what they thought were the biggest challenges that families face in securing childcare. Citywide, 42% of respondents thought cost was the most pressing challenge, while 22% and 14% said availability of childcare and waitlists[2] for programs, respectively, were the biggest hurdles. The most commonly cited challenges varied by ethnicity: 36% of Black respondents identified waitlists as a challenge, more than two and a half times the citywide rate (14%). Other important challenges citywide were program schedule and hours, location and convenience, and quality.

Respondents were satisfied with both their public and private schools

Charter school satisfaction was less favorable than both public (SFUSD) and private schools, with 71% of respondents reporting being satisfied with the quality. Respondents were more likely to be very satisfied with their private school (71%) than they were with their public school (49%). There were minimal differences in school satisfaction across ethnicity, child age, and income. An exception is that respondents with household incomes of less than 500% FPL were significantly more likely to be satisfied with the quality of their charter school than those who earn more. Additionally, 4% of respondents had one or more children who attend school outside of San Francisco.[3]

More than 50% of respondents of all ethnicities except White had one or more children enrolled in public school.

In particular, more than half (54%) of respondents in district 2 had a child enrolled in private school, as compared to 3% in district 3.

One-third of respondents had a child in after-school programs

Districts 3 and 6 had a significantly higher percentage of respondents with a child enrolled in after-school programs than other districts; summer program enrollment showed less geographic variation. 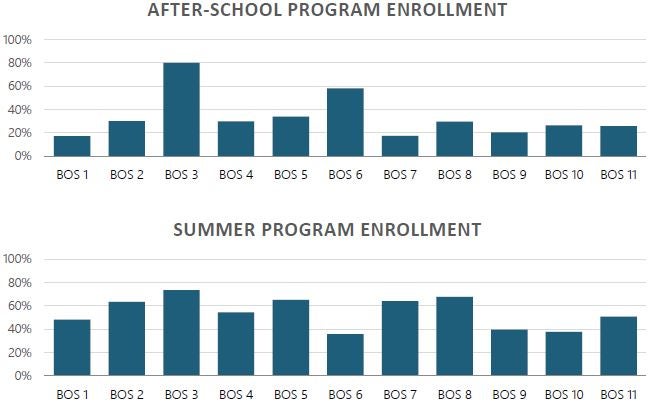 While respondents with household incomes above and below 500% FPL used after school programs at about the same rate, 33% and 31% respectively, respondents with higher incomes were more likely to have enrolled their child in summer programs, such as day care or camps.

Respondents were satisfied with their after-school and summer programs

Most respondents read to their children under five nearly every day 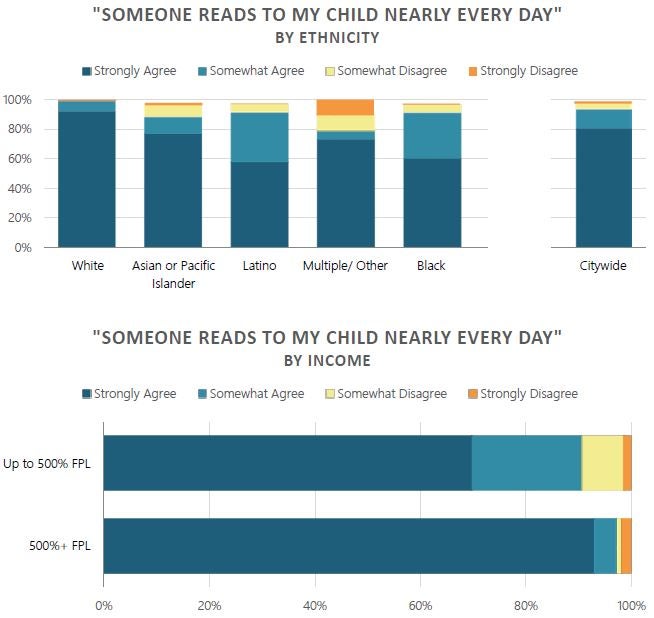 [1] The survey did not link individual children by age to types of care.

[2] There are a variety of waitlists maintained by different organizations for both City and non-City programs, none of which were specifically mentioned by respondents.

[3] The chart "School Enrollment" shows the percent of respondents who have at least one child enrolled in each school type.