Yesterday was a great day for Financial Justice in San Francisco!

Dozens of San Franciscans gathered on the steps of City Hall today for a press conference held by San Francisco Board of Supervisors President London Breed.

As reported in yesterday's San Francisco Chronicle, Board President Breed announced that she is introducing legislation to make San Francisco the first city and county in the nation to eliminate all criminal justice fees authorized by our local government. 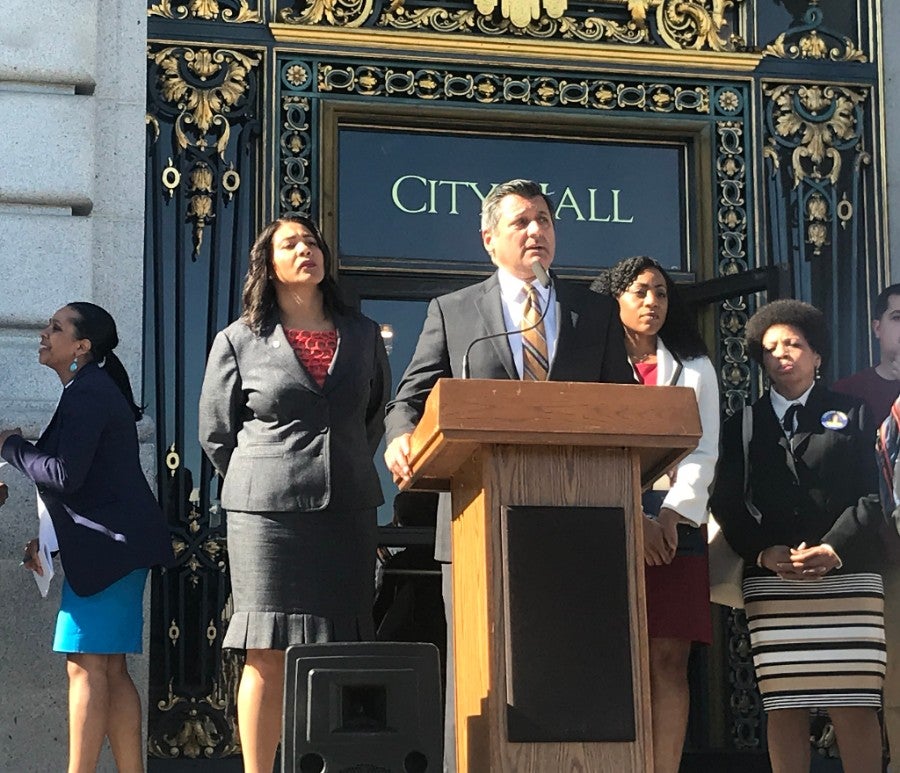 People who get caught up in the criminal justice system are often charged a long list of fees—various collections fees, fees for sentencing reports, investigation fees, fees to rent their ankle bracelets/electronic monitors, and monthly probation fees. We end up charging thousands of dollars in fees to people right when they’re trying to get back on their feet. These are often people who have just gotten out of jail and are struggling to find a job, a place to live and reconnect with their family.

We are all invested in them succeeding and re-integrating into their communities. But handing them a bill for thousands of dollars does just the opposite. They need what little money they have to pay the rent, to buy groceries, to buy their kids a pair of shoes.

As SF Board of Supervisors President London Breed said at yesterday's press conference, “these individuals deserve a fighting chance to turn their lives around, and eliminating these fees gives them that chance.”

Joseph Williams is someone who deserves a fighting chance. As reported in yesterday's San Francisco Chronicle, when Williams got out of San Francisco County Jail in 2015, he felt ready to reclaim his life and support his two children. At the press conference he said: “I’ve taken on two extra jobs just to pay these fees. I don’t get to see my kids because I’m working to pay these fees, and they don’t get the quality of life they deserve. I’m forced to choose between paying these fees and paying for diapers. These fees drive economic hardship.”

These fees are “high pain”—they hit families hard--  and “low gain”—very little revenue comes in from them, since people simply cannot afford to pay them.

San Francisco may be the first city and county to take this action. But we know we will not be the last. This legislation also challenges other cities and counties to end these onerous fees, and find more sustainable and just ways to fund our criminal justice system.

Many people collaborated to make this happen in San Francisco. Big thanks to Board President Breed, Public Defender Jeff Adachi, Probation Chief Karen Fletcher, and the offices of the Mayor, Sheriff and the District Attorney, as well as everyone in the Debt Free SF coalition.

Yours in Financial Justice,
Anne and Christa