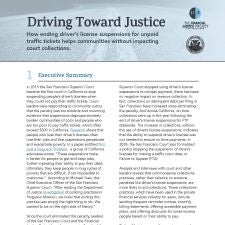 In 2015, the San Francisco Court became the first in the state to end the practice of suspending driver’s licenses for people who could not afford to pay their traffic tickets. Court leaders were responding to community outcry that the penalty was too extreme, driving low-income people deeper into poverty, and disproportionately impacting people of color. Since San Francisco stopped the use of license suspensions, courts and jurisdictions from across the country reached out: they want to know whether ending these suspensions resulted in a loss of revenue for the court. Today the Financial Justice Project releases a report finding that since the San Francisco Superior Court stopped using driver’s license suspensions to compel payment, there has been no negative impact on revenue collection. In fact, collections per filing in San Francisco have increased slightly since eliminating the penalty. Across the state, collections went up following the end of license suspensions for Failure to Pay. Research and interviews with court and other leaders reveals that commonsense collection practices such as frequent reminder notices, monthly billing statements, accessible payment plans, and discounts based on ability to pay are more effective than extreme penalties like suspensions. We hope this paper is useful for state and local officials across the country who are exploring ending this onerous penalty.