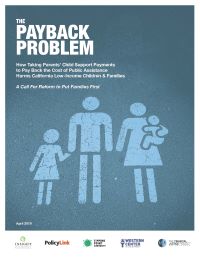 The report reveals that every year, hundreds of thousands of low-income children do not receive their full child support payment. That’s because low-income families only receive the first $50 of a parent’s monthly child support payment; the rest is redirected to pay back the cost of public benefits, like Medi-Cal and CalWORKs. In California, 70% of outstanding child support debt is owed to the government, not to children. In the report, we find that requiring parents to pay back public assistance takes valuable resources away from children living in poverty, disproportionately harms children of color, and sets low-income parents up to fail. The penalties that kick in when someone can’t afford to pay – including ten percent compound interest, suspending driver’s licenses and incarceration- are counterproductive and set low-income parents up to fail. Momentum is growing for reform, and several statewide bills have been introduced to make the system work better for low-income families. The report, and potential legislative changes, were featured in an op-ed authored by Financial Justice Project Director Anne Stuhldreher in the Los Angeles Times: Why Child Support in California Isn’t Going Where It’s Needed Most.